Would you like to switch to the accessible version of this site?

Don't need the accessible version of this site?

A Doctor’s Confession to Orlando
And why, despite all, I still do what I do… 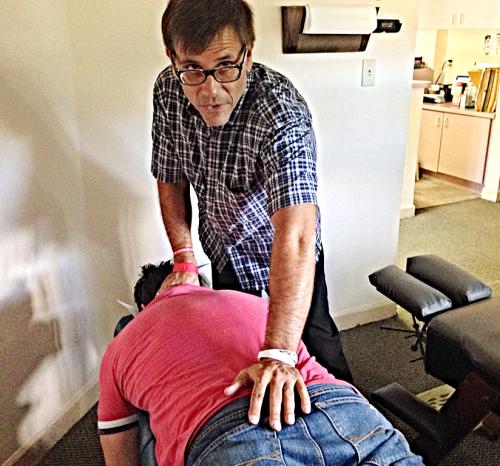 Let me explain the photo in this letter. When I meet people in town they usually say, “Oh yeah, I know you; you’re Dr. John, the guy on the billboard and on the radio.” Well now I’d like to introduce you to the love of my life, Maida, and our six children that God allowed us to birth at home.

On January 1, 2000, at 11am something happened to me that changed my life forever. I was just lying down resting in my bedroom. Something exploded in my spine. It felt like someone was sticking an ice pick in my back and out my gut. I couldn’t breathe. I couldn’t move. Both my legs and lower body shut down. There was no movement, just faint breathing. I said to myself, “this is it.” And that’s not all…

Within the next couple of hours I had doctors and therapists at my side. No one could figure out what was wrong. Specialists of whom I have respected and trusted for over 20 years had absolutely no idea why my body was shutting down. At one point everyone got together and said, “We’ve got to move him from this contorted position. He’s been motionless for several hours.” Well that decision was a big mistake. The moment they tried to lift my body, it was like a tire exploding inside of my spine. All of these top-notch doctors, specialists, my nine-month pregnant wife, and my two little boys were staring at me, while I lay motionless on the floor. Then it happened. I remember the exact second my eyes caught my wife’s eyes. It was one of those moments where all craziness and intense activity vanished. It was just my wife and I; we stared at each other eyeball to eyeball, hand in hand, having one of those talks every couple dreads. We’d both known it for twelve hours or so. It was like a giant dead elephant lying there, rotting in the middle of the bedroom. She just kept walking around it, acting as if it wasn’t there because it was painful to do anything else. “It” was the fact that our Chiropractic dreams were dead. I don’t know what was worse, the shame, the embarrassment, or the utter bone grinding frustration of being the only Chiropractor in town not able to move his legs. Then finally someone said, “Why don’t we PRAY for Dr. John.” My wife knelt down next to me, along with Patricia, Irina, Dr. Joe (my brother), and our boys. You won’t believe what happened next! As my wife started to pray, she placed her hands on my chest. Instantly, they turned into what felt like two hot pokers. In fact, the color of her hands turned beet red. Although I thought it was over, it was just the beginning. It took about 40 days for my total recovery. God is a faithful God!

What about you? What about your family? What pains, illnesses, or infirmities are you facing today? It’s so strange to me how God works, because now people come to me with their stabbing ice pick pains, their migraines, chronic neck pain, shoulder/arm pain, whiplash from car accidents, backaches, ear infections, asthma, allergies, A.D.D., PMS, numbness of the limbs, carpal tunnel syndrome, and athletic injuries, just to name a few.

Bellomo Family Chiropractic Life Center and the beginning of true health. Our center was first conceived in 1979 while Dr. John was attending an undergraduate nutrition class in preparation for attending the Life Chiropractic College. He envisioned a place with blooming azaleas and towering oak trees. Nestled under the oaks was a cozy, free-standing building with a colorful rose garden (to this day Dr. John enjoys handing out these roses to his members). The interior of the office exemplifies a warm, healing atmosphere with a unique open design.

In February 1988, this vision became a reality with the opening of the Bellomo Chiropractic Life Center. Dr. John’s principle of “service first” was instilled in him by his father, Joseph, his mother, Joanna, and his grandmother, Malfalda Tacinelli. In addition, Malfalda said, “Listen to God, work hard and give people more than what they pay for.” From this philosophy evolved the Life Center’s purpose: “Give for the sake of giving, serve for the sake of serving, and love for the sake of loving, and to accept all people through its doors regardless of health or financial condition. As a result, of this lasting purpose of service, the Bellomo Family Chiropractic Center has become a leader in Chiropractic wellness throughout the state of Florida and enjoys referrals from distinguished doctors throughout the country.

Here is what some of my patients have to say:

“Since going to Dr. John, I have stopped all medication and have watched my body heal and come into a greater state of wellness.” –Martin Banzhaf from Sanford

“My family’s health level is consistently being elevated through prayer, eating right, and Chiropractic.” –Susan Mart from Apopka

“My twins, Andrew and Alex, have not been sick –  not even once – for the two and a half years they have been receiving Chiropractic care by Dr. John. And we were able to lower our insurance premiums.” –Tracy Rodriguez from Orlando

Chiropractic care has been in my family since 1957. There are so-called experts out there that tell people a lot of things that are ridiculous about my profession. But the studies speak for themselves, like the Virginia study that showed that 98% of patients who saw a Chiropractor were satisfied with their results. Forty-seven million Americans no longer have health insurance, and those who do, have found that their benefits are reduced, the care and the quality of doctoring is poor, and the service is second rate. That is why my wife and I have chosen to refuse insurance coverage for the entire family. Oh, there are other reasons…studies show that Chiropractic can double your immune system capacity, naturally and without harmful side effects. The immune system fights cold, flu, and other “childhood disease.” Many of our families, as well as myself, agree that we can save money on our healthcare expenses while staying healthy the non-toxic way.

My qualifications…I’m a graduate of Life University, the largest Chiropractic College in the world and was one of the first certified Pediatric Chiropractors in the southeast. I’ve been entrusted to take care of newborns in hospitals to our eldest members that were 99-plus, and even well-known pro-athletes that you may know. I’ve been blessed to live in the same city for the past 28 years and have always kept my fees low to help people who need help.

We would love to talk with you!
In His Hands,
Dr. John P. Bellomo, D.C.

Creating a successful career in the healthcare industry is something that takes time, patience, and a devout form of dedication that few people are blessed with. Over the course of the life of modern medicine countless people have attempted to become practitioners in one field or another but have failed due to an inability to commit to their careers. Dr. John Bellomo, the leading chiropractor in Orlando, Florida, is one of the few professionals that have been able to overcome the temptation of taking the easy way out and has dedicated his life to the rewarding, if difficult, field of medical care. As a chiropractor, Dr. John Bellomo has been through years of schooling and has put all of this experience to use in the founding of his own practice: the Bellomo Family Chiropractic Life Center. With the help of his wife, Maida Bellomo, Dr. John Bellomo has been able to create a flourishing and effective practice that has benefitted the lives of its patients and the overall wellbeing of the community.

Doctors choose their fields for many different reasons, and Dr. John Bellomo chose chiropractic because it manifested a way in which people could achieve healthy living without resorting to invasive procedures and chemical medications– both of which can do as much harm as good. A strong proponent of healthy eating, Dr. John Bellomo has become an important figure in the Orlando community. Recognized as a trusted resource for information concerning both health and healthy lifestyles, John Bellomo is the go-to professional for all health-conscious inhabitants of the city.